Parker completes his AKC Championship in just two weekends with 5 Best of Breed Wins, 4 Majors, and two Puppy Working Group 1 wins! Parker wins Best of Breed at the German Pinscher Club of America supported Entry in Kansas April 2008!Parker wins a Working Group 3 in Roswell New Mexico, September 2008!Parker wins 'Best of Breed' at the 2008 AKC Eukanuba National Championship in Long Beach, CA!Parker heads off with his breeder Kimberle Schiff of Oakwood German Pinschers for the Westminster Kennel Club Dog Show in New York City and he wins Best of Opposite Sex! His breeder also takes him out for a few weekends of shows & completes his Grand Champion Title! A huge thanks to Parker's breeder Kimberle for showing Parker to his Grand Champion title & for showing him to his win at Westminster!

Parker is an all Australian dog born in the USA! Both of his parents Georgia & Markus came from the world renown Kaitler Kennels. The puppies were born & raised by Kimberle Schiff at Oakwood Kennel in New York. Parker has turned out to be a wonderful house dog and companion, as well as a gorgeous show dog. Thank you to Kimberle & Michele for breeding such a spectacular dog & allowing me to have him. He has a perfect temperament, excellent structure/movement & a gorgeous head too! Parker has proven to be a great sire too. In just a few litters he has sired 9 AKC Champions, 2 of which are top ranked multiple group placing dogs. I feel very lucky to have Parker! 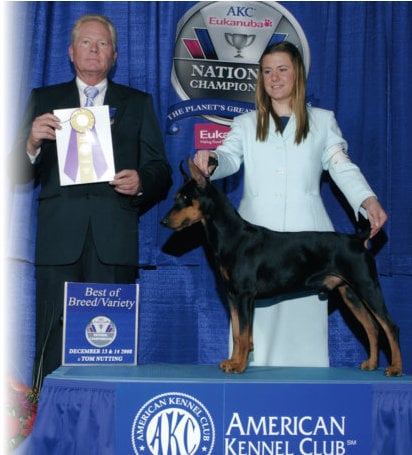 Parker winning Best of Breed at the Eukanuba National Championship